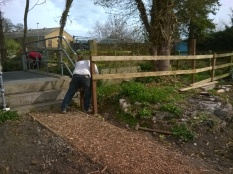 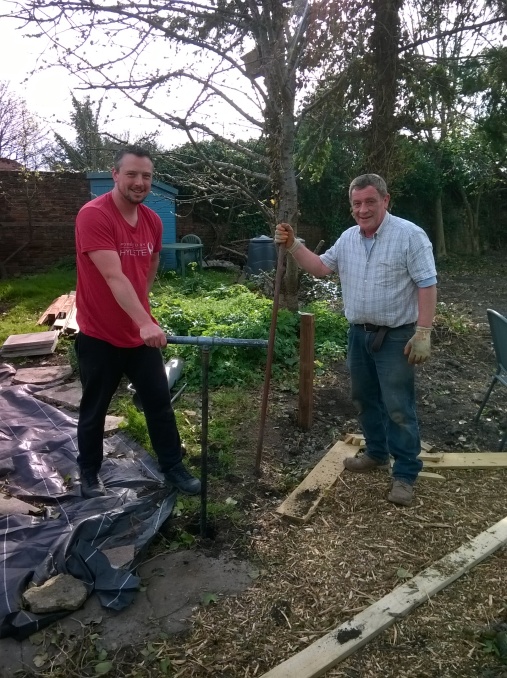 Simon Picot and John Guthrie teamed up to install new fencing to the new allotment entrance and to fill gaps around the main weir this week.

Sally Kerin has thanked them for their brilliant work.  Maureen on plot 25 is particularly pleased as there is now a clear boundary to her plot by the carpark.

Simon and John, with his partner Maya, are tenants of the new allotments and have been actively involved in the completion works since occupying their plots a few weeks ago.  Both have got stuck in to preparing their ground, despite the dry weather making the going tough.  John has a deadline as Maya is six months pregnant.

The latest site poster can be viewed from link below 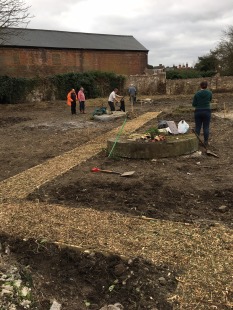 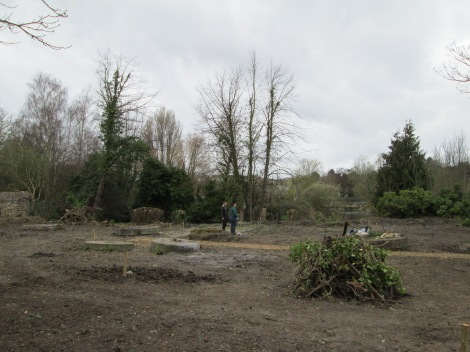 The new allotments have been let following the site strip and levelling carried out by Kevin Nugent over three days with a hired digger.  This vital task, which included sealing the leaking stream bank, transformed the site so it can be put in to use.  The committee have expressed their sincere thanks to Kevin, on behalf of the membership, for his generous assitance.

The remaining work is to repair existing and install additional fencing, construct the decking over the original leak location and provide a permanent security railing at the end of the perimeter wall.

The area has now been stripped of vegetation and levelled, the leak in the stream bank sealed, access path lines excavated, and the area rough dug with the digger.

Our own Kevin Nugent carried out the work with a digger from Faversham Hire last week.  The committee are extremely grateful to Kevin for enabling this rapid advance in progress.

Setting out of plots will take place this week.

We will now be able to let the six new plots this coming weekend to the next group on the waiting list, who are all keen to help complete the work, starting with the laying of access paths at the next work party on 19th March.

The clean up on site this weekend was a great success.  Over eighty bags of rubbish have been removed by BIFFA today.

Thanks to Sally Kerin for organising the event, Sandra Moriarty for help in clearing metal from the new allotment area, Hazel Grave, Keith Thompson, Ashley and Daniel Haines for clearing rubbish from around the site.

PLEASE REMEMBER, THIS WAS A ONE OFF OPORTUNITY.  NO MORE RUBBISH IS TO BE DEPOSITED IN NTHE ENTRANCE AREA.

METAL DISPOSAL
Metal can still be deposited in the enclosure at the end of the main drive ready for collection later this month.  You will be advised when this facility is no longer available. 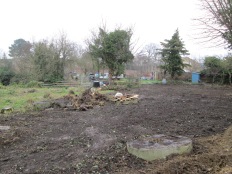 Work started today on the site strip and levelling work.

Sally Kerin met our volunteer digger driver, Kevin Nugent, at the outset and expressed our sincere thanks for giving his time and expertise to the project.

Kevin and his wife Sue joined us last year and have transformed their previously overgrown plot.  He has has now retired and offered to undertake this major task so that more plots can be provided to meet demand.

The most picturesque allotments in south-east England. A haven not just for gardeners but also for bees, butterflies and birds, particularly waterfowl.