As the spring progresses we can look forward to seeing more insects on the wing on warm sunny days, though we are a tad short of these at present! This article describes some of the first bees to appear in spring. The next will feature spring butterflies.

Prior to starting nest building the queens replenish their body condition by feeding on early spring flowers. They may also be seen in wavering low flight just above ground level investigating gaps in the vegetation and holes in the ground. These are queens searching for nest sites. Bumblebees nest at ground level in tussocky grass and below ground in pre-existing holes. They often favour old mouse holes and tunnels, for both like to nest underground. Gardeners can help by not cutting back and tidying everywhere: leave some warm, sheltered areas of rough grass and moss for the bees. Occasionally bumblebees nest in unusual places such as bird boxes, compost heaps or under sheds.

Another early bee is the bumblebee look-a-like, the Hairy-footed Flower-bee. This is common on the allotment. Males may be seen dashing around in flight looking for a mate and visiting flowers and are a tawny buff colour. The bee gets its name from the long hairs on the lower segments of the male middle leg. Confusingly, the females look quite different and are all black except for some yellow hairs on the hind leg. They love feeding on flowers such as Lungwort Pulmonaria and weeds such as Red Dead-nettle and often approach flowers with their long proboscis (tongue) extended in front of the head. The females nest in the soft mortar of old walls and rarely on the ground. There are plenty of suitable walls on the allotments. 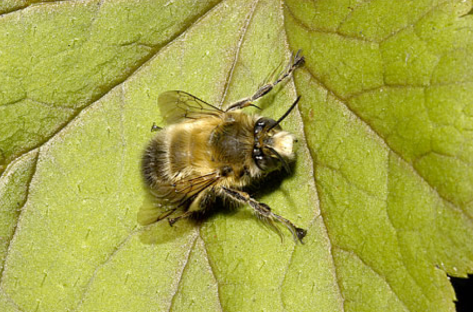 Solitary bees make up the majority of the bees in the UK and many of them are important pollinators of our fruit trees. Solitary bees make their own burrows in loose soil, old walls or use holes in wood, depending on the species.

The Tawny mining bee is one of the early emerging spring species that favours gardens and parks and often nests in bare patches in lawns and paths. Its nest mound has a characteristic appearance, like a mini volcano of soil particles with a hole in the centre that leads to an underground chamber excavated by the female.

The Dark-edged Bee-fly is another insect on the wing in the allotments from March to June and often mistaken for a bee. It spends a lot of time hovering, with extremely rapid wing beats, in front of flowers and has a long proboscis which projects in front of the body. This Bee-fly loves to visit primroses. The dark fore edges to the wing can only really be seen when the bee-fly is perched. Despite its cute, furry appearance it has a rather gruesome way of life, because it lays its eggs in the nests of solitary mining bees. The female bee-flys pick up dust or sand at the end of the abdomen, using it to coat their eggs, which is thought to provide camouflage and perhaps also to add weight to them. The female then goes to the nest burrows of solitary bees, hovering over them to flick her eggs into them. The added weight from the sand may make it easier for her to flick the eggs through the air into the burrow. The bee-fly’s larva hatches, crawls into the burrow and waits for the bee’s own larva to grow to almost full size, at which point the bee-fly larva attacks the bee larva, feeding on its body fluids and eventually killing it. This is bad news for the bee of course but bees and bee-flys have evolved together and there is no evidence that bee-flies cause major declines in bees. 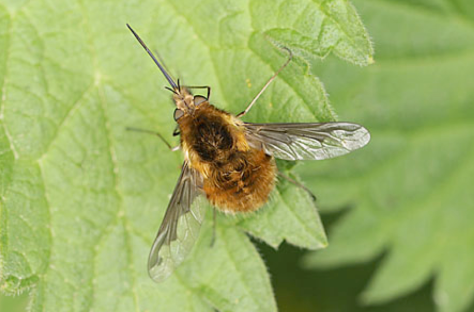 I hope that you have enjoyed reading about some of the insects that share the allotments with us. We hope to update this page regularly to feature the varied wildlife on our special allotment site.

All photos © by Bob Gomes.

The most picturesque allotments in south-east England. A haven not just for gardeners but also for bees, butterflies and birds, particularly waterfowl.